Fubo TV announced a new service plan which will let users pay $19.99 for three premium cable channels – Showtime, Starz and Epix – all included in their package of over-the-top television services.

fuboTV is a new streaming service that offers users a $19.99 Showtime, Starz & Epix Bundle. The service is available on Roku, Apple TV and iOS devices. 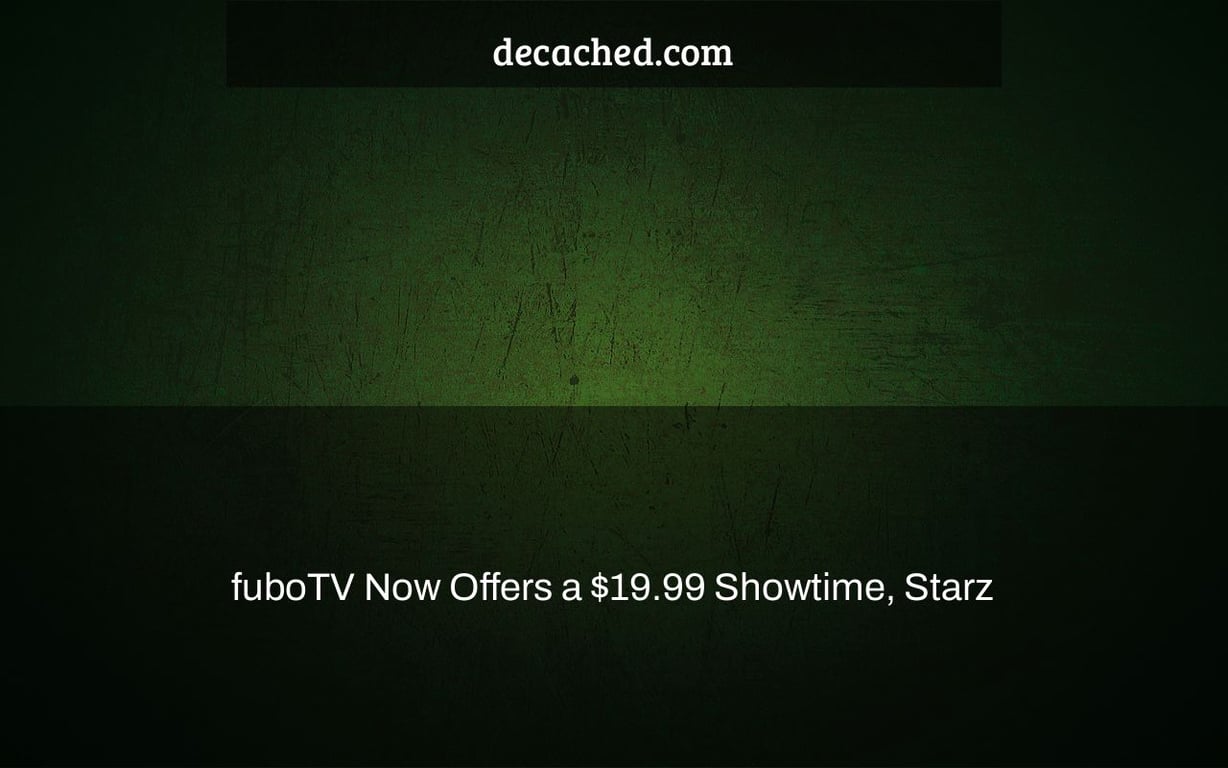 Showtime, Starz, and Epix are now available as part of a $19.99 entertainment package on fuboTV. This may be an excellent option for current members to save money by bundling all three subscriptions into one package. It also comes only a few months after YouTube TV released a comparable package.

While live sports are still emphasized on fuboTV, this has been reducing over time. With the addition of new entertainment channels, the service’s channel portfolio has progressively grown. The same can be said for the premium subscriptions accessible with fuboTV. In December of last year, customers were given the choice to add Epix, which was one of the most recent instances of this.

For an extra $19.99 per month, fuboTV is now allowing members to bundle an Epix subscription with Showtime and Starz subscriptions. Because all three services are accessible via the same interface and are paid together each month, combining the subscriptions might be a more convenient alternative than subscribing to them individually if a subscriber wants to watch series and movies from all three.

In addition, the combined subscription package is often less expensive. A Showtime membership on fuboTV, for example, is $10.99 a month, while Starz is $8.99 and Epix is $5.99. As a consequence, subscribing to all three individually would cost $25.97, over $6 more than fuboTV’s current price.

YouTube TV has announced the debut of its own premium membership package yesterday. YouTube TV’s ‘Entertainment Plus’ package contains both Showtime and Starz, similar to the one provided by fuboTV. However, for $29.99 a month, it provides access to HBO Max instead of Epix. The Entertainment Plus package, like fuboTV’s latest offering, saves $5 when compared to subscribing to all three services individually.

Because fuboTV does not yet offer HBO Max as a solo subscription, the package likely includes Epix instead. Of course, the quality of such bundles is subjective, and it will depend on which of the premium services a particular subscriber is most interested in. Regardless of whether package is ultimately superior, members to fuboTV and YouTube TV now have the opportunity to bundle several premium subscriptions together and save money.

fuboTV is the source of this information.

Subscribers to fuboTV may stream on up to two devices at the same time. However, most fuboTV members already get at least three simultaneous streams, so this is merely the default setting. Depending on the plan, add-ons, devices, and places, the number of devices might be as high as thirteen at the same time.

With a live TV subscription, having access to as many same-time streams as possible is nearly as significant as the price or the amount of channels included. Despite this, concurrent streams are not mentioned as often as they should be, leading to the number of streams being one of the areas where customers learn the hard way – after they’ve signed up and paid for a service.

Spending some time learning about a service’s simultaneous streams policy, such as fuboTV, will assist ensure that when the time comes to sign up, you’re receiving the correct service for your requirements.

The two feeds of fuboTV

Technically, fuboTV only allows you to watch two streams at once. This is the current default stance of the firm, and it applies to the Starter, Elite, and Latino Quarterly is a publication dedicated to the study of Latino plans. However, since this is the stated maximum, it should be regarded as the very bare minimum of streams allowed.

When it comes to what a fuboTV member may anticipate, it all depends on the package. Starting with the Starter and Latino Quarterly subscriptions, you can watch on up to three devices at the same time, much like YouTube TV. Elite customers, on the other hand, get simultaneous access to up to thirteen devices. Ten of the thirteen gadgets, however, may only be utilized when they are linked to the home network. When streaming away from home, only three devices may be used at the same time.

While each of the plans stated above has its own set of streams, things aren’t that simple. The reason for this is because the add-on, not the fuboTV package, determines the precise amount of streams.

Share with your family and Countless Displays are the two primary stream-related add-ons available on fuboTV. The price and number of streams added to a fuboTV subscription vary between these two subscription increases.

While fuboTV members may choose to incorporate these add-ons with their subscription, at least one of them is included in the main plans. This is how subscribers may obtain more than two streams, despite the fact that two is the default.

Subscribers cannot automatically add the same add-on to enhance the number of streams since the add-ons are already included in the plans. If they wish to raise the number, they’ll have to purchase the upgrade separately from their membership.

Because the Starter subscription already includes access to the Family Share add-on, customers may only upgrade to the Unlimited Screen bundle. Subscribers can’t raise the number of streams any further since the Family Share and Unlimited Screens add-ons are already included with Elite. The exact maximum amount of streams fuboTV presently provides is thirteen, regardless of subscription or add-on.

When you’re not at home, why not stream?

As previously indicated, the amount of streams accessible depends on whether you’re watching live TV at home or away from home. For example, although the Elite plan includes the option to watch on thirteen devices at the same time, this is contingent on very precise conditions. When an Elite member is away from home, the number of devices on which they may stream is limited to three.

In other words, the maximum number of away-from-home streams that may be viewed at once is now three. This is true regardless of your fuboTV package or add-ons.

an overview of fuboTV’s simultaneous feeds

Overall, fuboTV’s simultaneous stream policy is liberal, albeit a little unclear. Essentially, all fuboTV users get simultaneous access to at least two streams. Subscribers to Starter and Latino Quarterly may view on up to three devices simultaneously. While Elite customers have the ability to watch on up to thirteen devices at once, this is subject on location and the devices utilized.

These stream restrictions are set by the add-ons that come with a plan, not by the plan itself. As a consequence, the ability to add additional streams is heavily reliant on whatever add-ons come included with a subscription. In any case, thirteen simultaneous streams is the exact most that fuboTV presently supports, and it’s only available in particular scenarios.

For new users, fuboTV has made several adjustments to its Standard and Family plans and bundles. While the first adjustment eliminates the cheapest method to join the live TV streaming service, the second provides new users with an opportunity to obtain more value from their fuboTV subscription.

Although there are several live TV streaming services available in the United States, fuboTV places a somewhat larger focus on live sports access than others. That focus, though, comes with a larger monthly cost, and the entry level price has recently increased even further.

The fuboTV Standard package cost $59.99 per month, and although it had previously been concealed, it was now openly accessible to anyone who knew where to search. The option has now been fully withdrawn from the service, leaving new consumers with no choice except to sign up for the Family plan. The Family plan, which costs $64.99 per month, is currently the lowest live TV package offered by fuboTV.

With the Family plan, you’ll get more bang for your buck.

The Family plan includes several noticeable enhancements, like extra cloud DVR hours to record with and simultaneous streams to utilize at the same time, despite the fact that the entry level pricing has gone from $59.99 to $64.99 per month. FuboTV is now giving additional channels as long as the subscriber is prepared to sign up for a longer length of time, which adds to the value.

After clicking the “start free trial” button and entering their email address and verified location, the customer will be given the choice of joining up on a monthly or quarterly basis.

The plan does not become much cheaper if you sign up for three months, but fuboTV is now combining the fubo Extra add-on with the quarterly payment option. As a consequence, users who pay for three months in advance have access to an extra 47 channels. In addition, the cloud DVR capacity has been increased from 250 to 1,000 hours, and two additional simultaneous streams have been introduced. 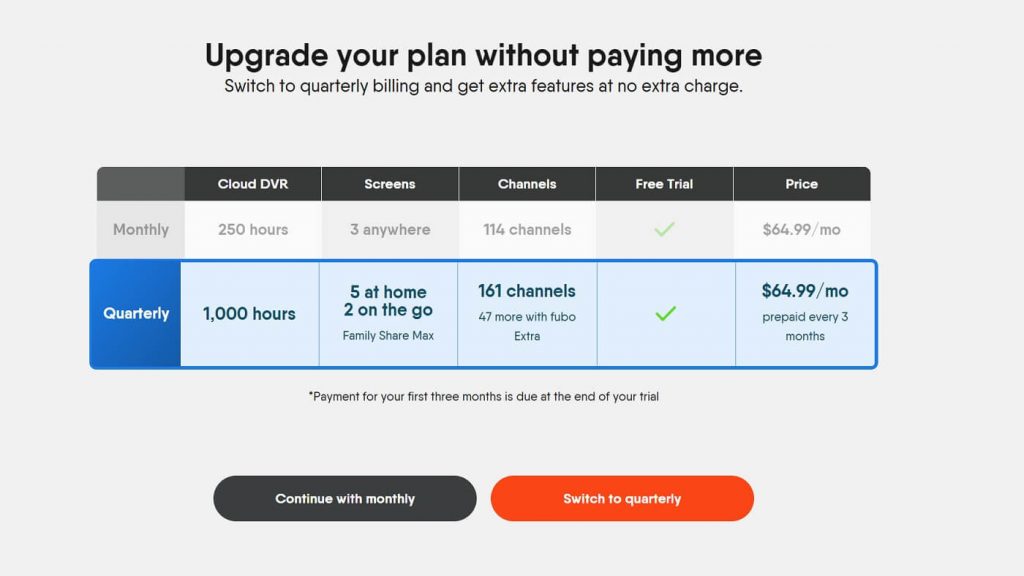 In general, the fubo Extra add-on costs $7.99 per month, making it a reasonable option for individuals who don’t want to commit to three months in advance but still want access to the extra channels and streams.

The addition of the Cloud DVR 1000 (recording hours) and Family Share Max (streams) add-ons, however, brings the Family plan closer to parity with the Elite plan.

Given that the Elite plan costs $79.99 per month, paying $194.97 ($64.99 per month) at the start of each three-month cycle might be a reasonable alternative for individuals wishing to get the most out of their subscription without paying the highest fees.

That is, as long as they are certain they will keep their fuboTV subscription for the whole three months.

fuboTV is the source of this information.

fuboTV Now Offers a $19.99 Showtime, Starz & Epix Bundle. fuboTV is an online streaming service that offers live sports and entertainment events in the US. The service has just announced a new bundle that includes three months of access to Showtime, Starz and Epix for only $19.99. Reference: epix bundle.

How much does it cost to add Showtime to FUBO?

Is Starz free on fuboTV?

A: Starz is not on fuboTV.

Is Showtime included with FUBO TV?

A: Showtime is not included with FUBO TV. You can purchase Showtime from the FUBO store for $14.99 a month, or you could sign up to try it out for free before buying it if you dont mind watching commercials and having limited features turned off during that trial period